Why, oh why, have I only just got my hands on Joe Abercrombie.

One of his books that is, not the author himself.

Wandering into a local charity shop, I came across a copy of Best Served Cold. A thick tome, featuring a female warrior holding a sword and a quote from George R. R. Martin on the front stating ‘This is his best book yet’.

Since my fantasy withdrawal symptoms are sort of George’s fault – I’ve read (and reread) all of the A Game of Thrones books and am, like many fans, wondering if there’ll ever be a wrap-up book in the series before he, or we for that matter, expire – I figured Mr Martin owed me a good interim read.

So, I paid my dues (sorry Joe, charity shop=no royalties but now I’ve found you I may be persuaded to part with cold, hard cash that lines your authorial coffers for the next book of yours I read) and took the book home.

What’s it about? (No spoilers I promise, it’s on the back cover blurb).

The most feared and famous mercenary in Styria, Monzcarro Murcatto, has become a shade too popular for her employer, Grand Duke Orso’s, liking. Her brother is murdered and she is left for dead. Broken but alive, she burns for revenge. ‘Whatever the cost, however distasteful the allies required, seven men must die…’

This is epic fantasy, set in a large and vividly imagined world. It has a female heroine (if you can call her heroic) who is most definitely not a teenager or a Chosen One. She’s hard, bitter, focused, messed up and she has her reasons to chase vengeance.

Was it any good?

Was?? Hang on…I haven’t finished it yet! I’m three-quarters of the way through. But, yes, it’s good. I wouldn’t normally review a book without finishing it, so how do I know that without actually getting to the end? Lately, I’ve not had a lot of reading time. Mostly, last thing at night when I’m huddled under my duvet trying to keep warm on an English winter’s night. Then I might not pick up the book again for a day or so. This means I easily lose my place in the story and if a book isn’t all that, I tend to forget about it and start a different one. (For the record, I used to be a ‘to the bitter end, no matter what’ reader, but nowadays I don’t have time. If it doesn’t keep me interested, away it goes).

I’ve struggled to put Best Served Cold down. When I’ve lacked time to get back to it for a day or so, I’ve picked it up and been immersed straight back into the story. If the ending doesn’t quite come up to scratch, I’m already happy to forgive the author because I’ve loved everything else about the book.

Having done some research on Mr Abercrombie before starting this post, I now know this is a standalone novel set in a previous world he’s created. The world building is incredible and immersive and hooked me from the start. Some of the reviews by fans on Amazon say this isn’t his best book so I’m very keen to read his other works as I enjoyed it and disagreed with some of the negative points reviewers put across. Hopefully, his other books will live up to the reviewers’ hype.

It is pretty much a one-track story without any real subplots. It’s not as epically sprawling as A Game of Thrones or Robin Hobbs Farseer and The Liveship Traders Trilogies but it still kept a good pace for 700 odd pages. There’s only a touch of magic so it would probably come into the low fantasy genre – no elves, dwarves, orcs or wizards.

My favourite character is Caul Shivers, the barbarian Northman who fights alongside Murcatto. Abercrombie writes Shivers’ chapters in Shivers’ actual voice, although in the third person. For me, this worked brilliantly and brought the character straight off the page.

Like George R.R. Martin, Abercrombie puts his characters through the mill. You’re never quite sure who is going to make it to the end or meet a sticky end along the way. There are brutal war scenes, violence that should be gratuitous but wasn’t given we’re in the middle of all-out war, the occasional hardcore sex scene a la A Game of Thrones and I’m not sure any of the main characters are going to redeem themselves, so, on the whole, it’s dark stuff. It’s lightened by Abercrombie’s use of irony and his witty turn of dialogue which makes his characters spark well together.

If anyone has any good fantasy author recommendations let me know. I’m on the lookout for a good series.

In return, I highly recommend Robin Hobb, especially The Liveship Traders trilogy which sits between her two Farseer trilogies. It’s a bit of a slow starter but well worth sticking with and can be read as a standalone series if you can’t face nine books plus her newer Rainwild Chronicles which follows on from Liveships (but, seriously, who could turn down a nine book series??).

A few years old now, but I only just found it. It’s an interview by Fran Wilde with one of my favourite authors, Robin Hobb, on the use of food in her fantasy worlds. If you’ve not yet discovered her books, I recommend them highly. 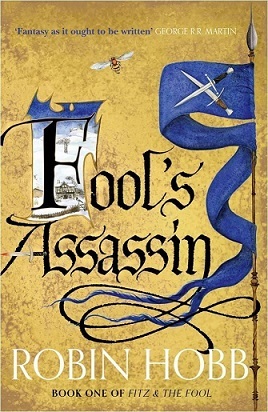 This summer, I met Robin Hobb at Loncon3. We were both on a great food politics panel and she is as lovely and charming in person as you can imagine. When I asked her later if she’d join Cooking the Books for an interview, I knew my chances were slim, given that she’s hard at work on the new book – but she said yes. Everyone wins!

Robin is the bestselling author of short stories, books, and fantasy series including the Farseer trilogy, The Liveship Traders trilogy, and The Fitz and the Fool trilogy. Knowing that Robin has many loyal fans, I offered the lovely folks at reddit/fantasy a chance to join me in interviewing her. What follows are her fantastic answers to the questions we put together — please join me in welcoming Robin Hobb to the November Cooking the Books!